I got faith of the heart

So, since this is bunday, here is a picture of Mimle, a bad cellphone one, but I was home alone, and she decided I needed some company and joined me on the sofa. She sat there with me for a long time while I watched some tv, and stitched.... 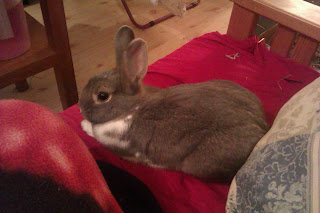 .....THIS:
And, now, I am finished. A Minnie and Mickey design. I know I haven't shown you anything selfmade in a while. But the course is rather intense, and it is the secret season after all;) 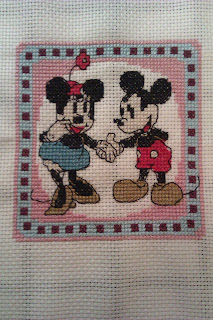 This was an DMC kit. I found some of the red squares oddly placed, so I decided they should be the same on each side so that they were symmetrical atleast. And added some backstitch to areas I thought there should be backstitch, like one of Minnie's ears were not backstitched. Odd. But as always with DMC the threads were nice, the chart easy to follow and the colouring good. Just think the design process should have been perfected a little more before the design went into the shops, don't know if it matters anymore though, since I heard that they will stop selling Disney designs.... ^^

If you are here for another free design, I have another small Christmas bauble in store for you. 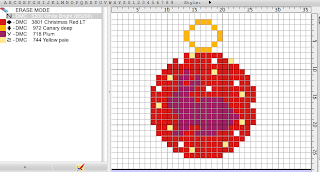 Isn't it cute? If you didn't know I love bunnies. And bunnies and christmas do match. I am going to make all of these on perforated paper and hang them on a string :)

Oh, and the poll for some reason does not work, last time I checked the bunnies were winning, so unless more people than four (which were the number of votes on the bunnies last I checked) disagree that the bunnies should win, then they must leave a vote in the comment section of this post. And then we will see which design I have to make. You have until the 31st. Good luck.


Yeah, and we are watching Star Trek Voyager and Enterprise simultaneously, that is where the title of the post comes from. And so far I can say that Enterprise is a lot more fun than Voyager, sorry Kate.
Posted by Vilje Vanilje at 14:06 No comments:

Last halloween I gave you my heart 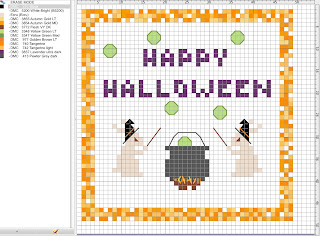 The last Halloween design, actually I am quite pleased with this one, I think it might be my favorite out of the set of four Halloween designs.... Trust me to like the rabbit design best :p My cat-loving friends like the cat design best, so I guess it comes to show our partialness.
What do you guys think? I am going to put up a poll where you can vote which of the Halloween designs you prefer and it will be open until Halloween.
Posted by Vilje Vanilje at 07:38 2 comments:

Since the first snow this season came here yesterday  (it didn't stay btw) I got a reminder that Christmas is not too far away, at least for us crafters, busying away to get the presents finished in time. So, I decided to get cracking and made a pattern for you. A christmas bauble. I quite like it.
Actually, I made five, but you will see the others next week, so stay tuned^^ 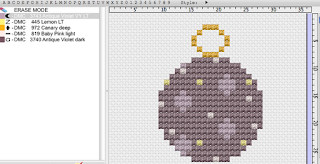 Posted by Vilje Vanilje at 14:29 No comments: 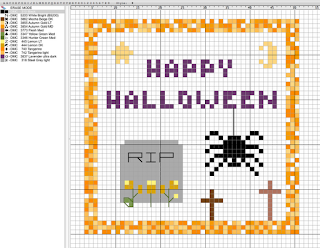 This one is the scariest I think^^
At the moment I am really tired, I have done almost nothing but sleep for something that feels like forever.

We have finished "Deep Space Nine" and are on full speed towards "Voyager".... I really do not like changes:P
Posted by Vilje Vanilje at 11:58 No comments:

Owling at the moon

So here are my owls. What do you think? I quite like them ^^ 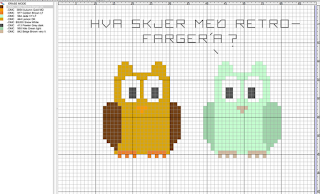 In english: What is up with the retro-owls colours? 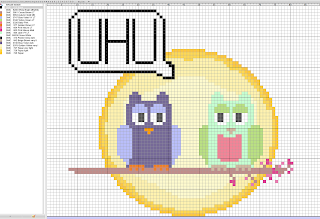 
I want to make them into something someday, but at the moment I don't quite have the time for anything because of this course. Hopefully it will get me a job though, so I will persevere. 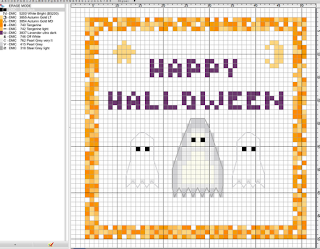 Here is another Halloween-chart, as promised. I think it would look great on black aida also.
I love Halloween, and I have a lot of ideas for different finishes too. But I don't have time before this halloween, but I will surely have it done by next year;)

Still doing my course, and hopefully we will start learning more than just the basics and really start to learn the program. ^^

Last night I left my crocheting needle on the couch, moments later, bunny had stolen my needle and was running around the living room with her trophy. But I did get it back before she had eaten any of it.
Maybe I should just learn that it is impossible to own any wooden items, because the rabbit thinks they are toys for her...

Oh, and regarding "Deep Space Nine", we have only 16 or so episodes, surely we will have seen all of them in time for the convention? 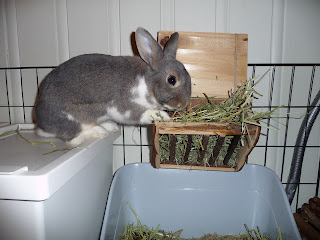 Since it is Bunday, here is bunny, sneaking some hay from a different angle than usual. She opened the lid by herself. #cleverbunny
Posted by Vilje Vanilje at 04:18 No comments: 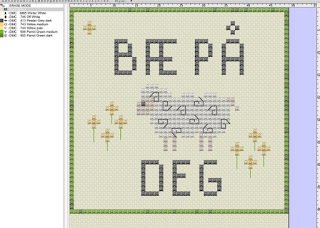 As promised, I made a sheep pattern, it should be sewn on ecru aida. What do you think?

It is another lame pun. :P Which goes something like this. Bah on you. Leave me a mail if you want the pattern. Viljeblomst(at)hotmail.com