And I did do some Wisp-ing.
This little guy came out of hiding and I did some white on his dress. I am liking this project and I think it will be fun to do the couching on it. Learning a new skill makes me happy. I am hoping to finish this in time for Christmas. And even when he is just occasionally outside I think it is do-able. See, I can make long term goals too. 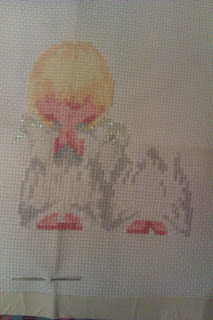 Fred! I love Fred. I worked on him yesterday (after I finished the entire page on Henry that I said was my goal, yay, a goal achieved. ) and a bit today. ( Yes, I know today was Wisp-Sunday, but I am allowed to deviate a little from my plan right? ) I have done all the greens and reds on the right side of the picture. :) But I just had a realization, which is, they have been a bit skimpy with the fabric. There is at the lowest 20 holes from the end of the picture and to the end of the aida. Not that much to go on:(  I am pretty sure it is not the wrong way or that I have miscalculated when gridding him. Because every which way I turn him, there is not much to go on... I know that when finished I can sew on more fabric for when I frame him, but I just felt really miffed when I saw how little leniency I had in aligning him perfectly in the middle. Oh, well, I am sure he will look good finished anyway. Even if I have misaligned him a little bit. It is just one of those little things that bug me. 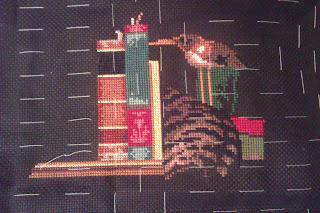 Posted by Vilje Vanilje at 16:25 No comments:

And now for something completely different.

But still vaguely familiar. It is Henry-time.

I know I have been a bit lax with my posting, so I am trying to amend that. There are a few posts that I have on my mind that I just have to write out. And since there might not be that much stitchy-stuff in those I am hoping you get your fix in this post. 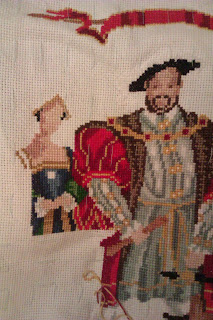 There is only a little bit left on Jane Seymour's head and then I am done with another page. ^^ Very happy about that. My small goal was to finish this page by the end of the week, and I am very happy to
have a goal that I've (nearly) accomplished. (in time)
I like small accomplishes, in fact I measure everything in small accomplishments. Painstakingly ticked off my increasing to-do-list.
Next week's goal is to finish Henry completely. ( not Henry as in the entire piece, but Henry as in the completion of his jacket. I am not insane enough to think that I can finish something as big as this in a week, when the other half took me six months)
In other news,  boyfriend and I have started watching Tudors together. <3 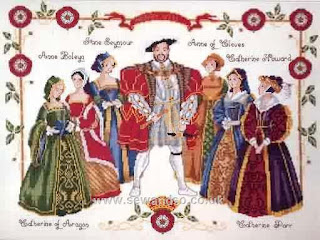 In case you have forgotten, this is how Henry and his crew will look once finished in another four months or so:P (picture borrowed from sewandso).

I am thinking that when I have completed this weeks goal I will take out dear Fred. Also, I must confess that I bought a small something. ( on sale) But, after secret project number two's completion I needed something easy and a travel-light stitch. So, for those of you familiar with it, it is a dictionary piece from "Bothy Threads".  I will not disclose which. ( Gorjuss was also from there, but this is completely different than her). And and, it is another piece stitched for an occasion, so, hence it will be remembered as Secret Project number 3.  And you will only see small peeks occasionally. And no, I have still not done ANY more threads on Secret Project Number One. But in danger of jinxing myself, there is soon another WiSP Sunday. 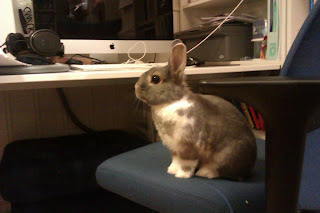 Bunny was having a small adventure, jumping up on our chairs and when spotted jumping down. Pretending it had not been her on that chair. Must have been some other bunny. 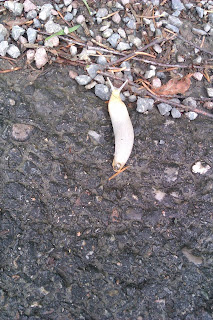 When boyfriend and I went for a walk the other day, in the short interval that it was not raining we spotted this little guy. I am pretty sure he was supposed to be brown? He was rather yucky.

And another Hello!Project song. C-ute released a double A-sided single, but I must confess I like Adam to Eve no dilemma best. Even if the other music-video is better.

And on Henry, I am steadily making progress, I will show you again soon. ^^
Posted by Vilje Vanilje at 14:37 No comments:

So, it has been a while

And while I am perfectly aware that it is WiSP Sunday here in the warren, I had no WiSPs to do... So instead I gave Henry the old dust off and persevered. 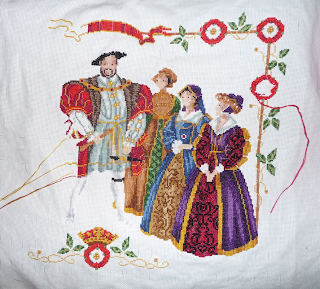 And if we pretend that we don't see the half-finished Tudor rose in the middle right of the picture I can (almost) honestly say that I am atlast halfway through! Yay. And it took me six months to do.

Now, you may wonder what happened to all of my secret WiSP-projects and think that I plain forgot I had them, but, I did tell you Secret WiSP number two was finished, and secret project number two is so utterly boring I DID plain forget.

Lets move on shall we, and I will unveil Secret Project number two:
Tadah! 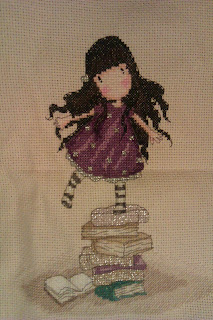 My dear friend got this as a present for finishing off her librarian degree. Yay you.
Alas she is still not in frames as I of yet have not found one worthy of her (or my friend) But I will keep looking. Meanwhile I suspect little lady Gorjuss books is lying somewhere in a drawer in my friend's room sitting pretty.

I leave you with my little lady, munching happily away on some parsley stems. Don't mind the clutter, she is in the habit of re-decorating after we have cleaned the house. ;) 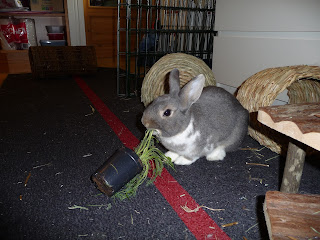 Posted by Vilje Vanilje at 14:36 No comments:


Another week another song. Yes, today is tuesday tunes, and yes, this week it is yet another japanese pop song. :)

But I do adore the lyrics, and they are helping me feel more positive in these days that are not too easy. And I have decided to be a yattaruchan too.

And tomorrow I will show you a little cross-stitching update.
Posted by Vilje Vanilje at 13:20 No comments:

I kept smiling because I didn't want you to hate me

So it is Tuesday tunes again, and I have two songs that I like this week:) The first is in Chinese and the other in Japanese. Edit/ I found the actual music video for the Chinese one, and it has a Alice in Wonderland theme. #happy

And since this is a stitching blog, here is a little guy I've been working on:) He is worked in one strand, which I don't like, but as he was a freebie and I don't have enough spare thread I just have to live with him looking a bit faint. But if I make him again I will make sure to use two strands. :) I love somebunny to love so I am certain I will make another if someone I know will give birth to a little boy^^ 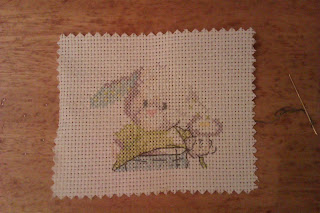 And I have made the bird from WOCS 204, but I as it will be a birthday card for someone who occasionally reads my blog I will not show you a picture. (most of you know how it looks I presume  too so)
But when gifted I will maybe out it up in my cards section.

The title today is from the above song, my favorite line from it, and I really can relate to it, but other than that it has no deeper meaning for this post.
Posted by Vilje Vanilje at 15:40 No comments:

Life in black and white 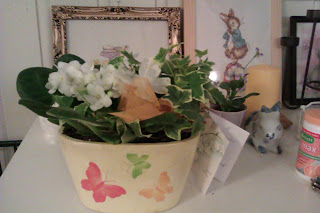 Another flower I received. It was lovely. There is a butterfly somewhere inside it too. From my aunt and uncle. It was very thoughtful. The funeral is done now. But there is still lots to do.....


This morning I have been taking old pictures out of a album that my father for some reason glued in. And since we are sharing them, they needed to be taken out of the album, and that is what I have been doing today, with a little bit of stitching. I finally feel ready to tackle Henry again too, I've missed him.... Want to see some? I found a surprising amount of old pictures with animals in them. I think I found four pictures with dogs in them. I am pretty sure this first picture is of my dad... (Or perhaps a lookalike.)
I will have a chat with my uncle about whois who in the pictures, and I think he is the only one who wants copies...

Another dog, or rather the same dog....

A girl with her horse.

I think, maybe, my grandfather. Who I never met. Certainly looks like him.

And look, a happy couple and their cat.

I did not know the people in my fathers family were so fond of pets. Whenever I talked about my rabbits I got comments of how good rabbit stew tasted. (I did get my fair share of that from my mothers side as well though, but most of them only like animals from afar.)

Back to some stitching news right? Since that is what you lot is here for? But I have been doing what I was supposed to do, and Secret Project Number 2 is finished
and as soon as I have gifted it I will show you a picture^^ I hope she will like it.

My ornament all done. What do you guys think? 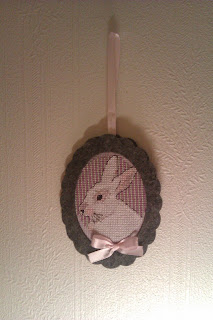 So, off to bed. There is so much left to do, that I can't do quite yet.

Posted by Vilje Vanilje at 16:37 No comments: