Merry Christmas Angel to you! 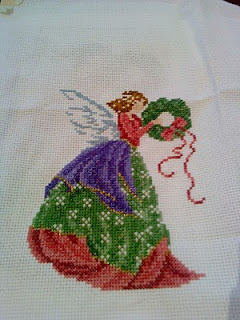 I am still not done with the Christmas Presents...
But I have until four tomorrow. And the angel is Aaalmost done. ^^

And some of my projects got done. The cat and the hat and one potholder, but then I ran out of yarn, so the second will get it after Christmas. :)

The bees are on hiatus, my mum is getting the rabbit picture instead. And the crochet angels I never started because I couldn't find the yarn. I have been Christmas cleaning, teehee. But this angel will be done by tomorrow. Might not get washed or framed. But the angel will be done. I am thinking since I have the aida to spare to make another facing the opposite way for next Christmas, so by then the picture will be complete? And for next Christmas make a frame too? I am sure my aunt will be pleased.

The purse that has been on hold since last Christmas is still not done... But, it is Christmas, so this is no time to think about all the things that have not been done, but those that made it.
So Merry Christmas indeed
Posted by Vilje Vanilje at 07:29 No comments: 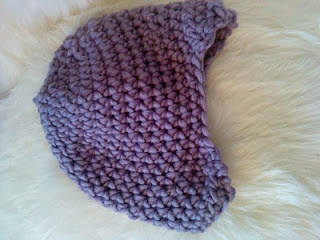 I have been neglecting my crocheting lately. And so I started making a christmas present. I enjoyed crocheting so much that I made another hat. So I am showing you the second hat. :) Since the second hat does not have a home yet.
I was thinking about it, and the hat does look kind of lonely, should I make a flower on it? Or ears?
I do love making hats and crocheting in the round, it went by oh-so-fast. So my new project after christmas? Making animal hats for all the gachas in their colours. ^^
I do need to practice my crocheting in the round. But it was so much FUN and I want to make MOAR! NOAW! Only trouble is: this hat. Who will get it? My initial thought was to make the other hat with this colour just as a border on the end of the hat, but when I did I could not fit the hat over my head and I am not really a fat-head. So if it did not fit me it would not fit anyone I knew. So I scrapped that idea and made this hat as a full hat. But the colour is so bleak and would suit someone dark, I don't know anyone who is dark.... So who is going to get this hat for christmas?
Stay tuned to find out.
Another IDEA I had was to just take the two hats and sew them together, twice as warm and it would not let any wind in. But it might not feel as good. Might be a bit too tight. Oh, woe is me.... What to do... I might just bite the dust and give in and ask the recipient what she wants, because she is the one who is going to wear the hat. Or I could just give it to her and add a note and any alterations would be added next time I met her...
Good Idea, lets ask her.
(That way if she chooses something and it does not work out properly, I am not to blame)
Posted by Vilje Vanilje at 04:46 2 comments: 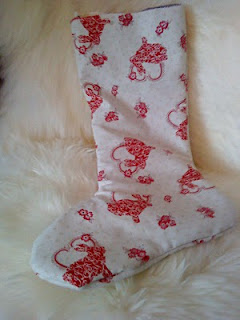 Vilje is making something for herself. What do you think?
I am in love with this fabric and my wonderful sowing machine....^^ 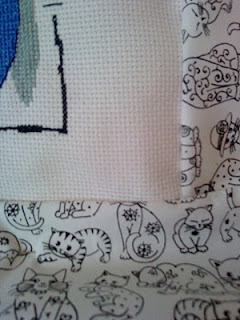 Lookie, a preview. So? Merry Christmas.
Posted by Vilje Vanilje at 02:54 No comments:

Monkey business and other business. 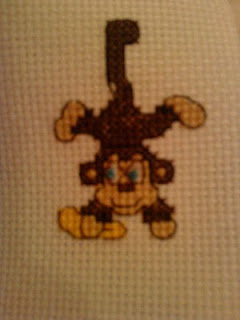 This a monkey, for the boyfriend. Don't say I didn't start early, this is his stocking for next year. ;)
And he thought it was his present this year, aww, bless him.
Look at his eyes, it is a french knot. FRENCH KNOT. I did it, I learned it all by myself. And how I loathe those french knots. Typically french. 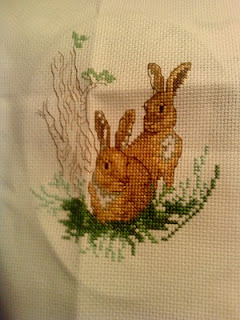 Another Tadah-Business! This is the rabbit all done. And see how much better it looks than with those awful feet?
And I must say, I loved doing the tree. Maybe my friends mother was right, maybe I would love to sew like she does? 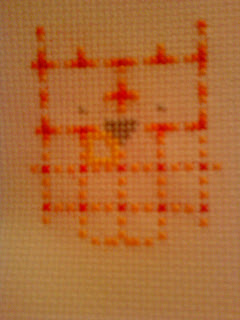 Guess What I Did?
But the rabbits were all done, and I have only two potholders, two cross-stitches, a hat, an angel, and one more item to do before christmas? I have time to make some more? Right?
And those cards I was making, you may ask, or rather you may not, because the cards are on hold atm.:P
Posted by Vilje Vanilje at 12:12 2 comments: